For the most part when you see option premiums they are fair reflections of their true value, having taken in specific issues related to risk and reward.

Occasionally there are inefficiencies in option pricing, most commonly seen when dividends are part of the equation.

However, one other inefficiency occurs during periods of low volatility when an option is deep in the money. In such cases you will often see that when taking the current stock price and subtracting from it the premium that someone is willing to pay, you are left with almost no time value, as the bulk of the premium represents the intrinsic value. When volatility is higher there is often great advantage to selling deep in the money options as they provide greater protection due to the added time value. However, with volatility at historical lows, that portion of a premium is greatly reduced.

Sometimes, therefore, it makes sense to consider closing out deep in the money positions.

By doing so you will likely incur a loss on the option portion of the trade and a nearly equal additional gain on the share sale of the transaction. That’s the key. The loss is mostly offset by the gain. What you get out of the transaction is the option to do something else with your money.

Today, for example, Trading Alerts were sent suggesting that positions in Carnival and later Macys be closed by concomitantly buying back the options and then selling the shares.

Note that I said concomitantly, because there is undue pricing risk if you attempt to execute the BTC and sale of shares as separate trades, particularly since prices can move quickly and adversely.

If you don’t quite know or understand the concept of spread trades or buy/write trades, first read this article and then let your brokerage execute the trade based upon the “net credit” or “net debit” price that you enter.

If you’ve ever wondered why your option tables sometimes won’t allow you to enter an odd price, like $0.43 and only allow you to enter either $0.40 or $0.45, yet you see that the last trade was for $0.43, it’s those people executing trades using spread execution that get the best prices and are more likely to have their trades executed.

In the cases today, rather than doing a “Buy/Write” you are executing a “Sell/write,” where the “write” portion is a “buy to close” order. It is exactly the opposite of a typical opening trade, a Buy/STO. This is a Sell/BTC.

Anyway, the concept of closing out a deep in the money position with time remaining on the contract makes sense if the cost is very low. It especially makes sense if you can then take the proceeds of the sale and put it to work elsewhere such that the net premium received from the new trade is greater than the costs associated with the closing trades.

In today’s situations the premium for the Carnival trade for the 6 trading days remaining was $0.02, while the Macys trade resulted in a premium expense of $0.05. Instead of your shares being assigned at $52.50 next Friday, you received $52.45 today. 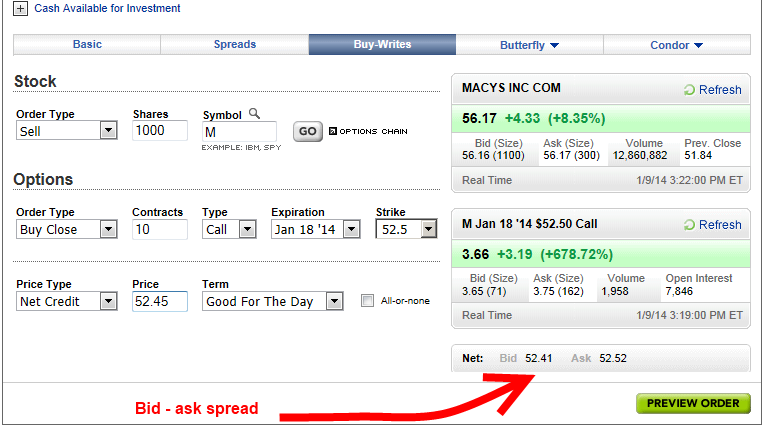 Most often there will be a fairly wide spread between the bid and the ask prices on the options for such deep in the money options. I generally place a bid that splits the difference and then watch and wait, ultimately deciding whether to fine tune the bid in order to get the transactions executed.

While the ideal situation would have you re-invest the money in order to generate even more income, some may just want to have their hands on the money now, having it available for an opportunity that may arise, rather than continuing to have it at risk.

While not really a consideration for the shares of Carnival, which has been deelply in the money for a while, that could easily have been the case with Macys, which skyrocketed today on news of their costs savings through layoffs.

That kind of price increase could just as quickly reverse between now and expiration next week, so the question is: Why wait and put yourself at risk when there is little, if anything to be gained by waiting?