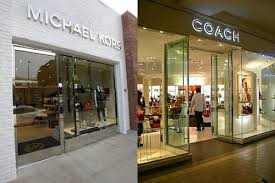 (A version of this article appeared in TheStreet)

It has been very easy to be disparaging of Coach (COH) these days.

Perhaps the root cause of the quantitative disappointment has been the near universal acknowledgement that Coach was no longer a very interesting place to shop, as Michael Kors (KORS) had displaced it in the hearts and more importantly, the literal and figurative pocketbooks of shoppers.

The first hint of trouble presented itself in August 2011 when shares plunged 6.5% after announcing earnings, following years of running higher, that took only a short rest in June 2010. While shares went bacl to their old ways of climbing higher under CEO and Chairman Lew Frankfort that climb came to a decided halt shortly after the Michael Kors IPO. 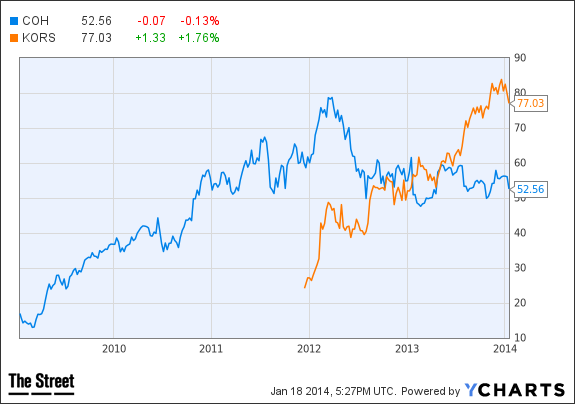 In 2013 Coach knew only large price moves following earnings reports, following the pattern that began in 2012. The difference, however, was that in 2013 all but one of those large price moves was higher, with -16.1%, +9.8%, -7.8% and -7.5% earnings related responses greeting increasingly wary and frustrated shareholders.

Coach reports its second quarter earnings on January 22, 2014 prior to the market’s open. The option market is implying a nearly 10% move upon that event, which comes on the heels of a 6.3% decline in shares in the past week.

For most, that may mean that this would be a good time to steer clear of Coach shares or even consider exiting existing psoitions, especially as the retail sector has been struggling to get consumers to part with their discretionary cash.

In the past year, while Coach has been a non-entity, I have owned it and sold calls on shares, or sold puts on eight occasions. Included in those trades were three sales of put options on the day prior to earnings and one purchase of shares and sale of calls on the day following disappointing earnings.

During that time Coach has fulfilled two of my cardinal requirements in that it has been a model of mediocrity, but still has something to offer and will do more than simply make a pretense of maintaing a business model.

My goal with Coach, as with all positions upon which I use a covered option strategy is to make a small rate of return and in a short time frame. My ideal trade is one that returns a 1% profit in a week’s time and surpasses the performance of the S&P 500 during the time period of the trade.

During 2013, the cumulative return from the eight Coach trades was 25.4% and the average holding period was 28 days. The average trade had an ROI of 3.2%, which when adjusted for the average holding period was less than the 1% goal, consistent with the lower premiums obtained in a low volatiity period. However, during the same time periods for each trade, the results surpassed the S&P 500 performance for the same time periods by 18.5%.

While I don’t place too much credibility on annualizing performance, the annualized performace of Coach, utilizing the serial covered option strategy, with some trades timed to coincide with earnings was 41.5%, while the annualized S&P 500 return was 34.7%. A longer period of observation also yielded similar favorable results

In the case of potential trades seeking to reach those objectives when earnings are to be released, my preference is to see whether there is an option premium available for the sale of puts that is at the extreme end of the implied volatility range or beyond. For Coach, the implied volatility suggests expectations of a price move in the $47.50 to $57.50 range, based on Friday’s closing price of $52.56.

The $47 January 24, 2014 put premium satisfies the quest for a 1% return and is at a strike price slightly outside of the implied volatility range. Essentially, the risk-reward proposition is a 1% return in the event of anything less than a 10% drop in share price. Anything more than a 10% price drop creates additional possibilities to generate returns, but extends the period of the trade.

As always, the sale of puts should only be undertaken if you’re prepared to take ownsership of shares at the strike price specified. While I wouldn’t shy away from share ownership in the event of a larger than anticipated price drop, I would be inclined to consider rolling over the put sale into a new expiration date and ideally at a lower strike price, if possible, repeating that process until expiration finally arrives.

While not everyone appreciates leather, everyone can appreciate investment profits, even if they come at the expense of corporate losses and a fall from grace.